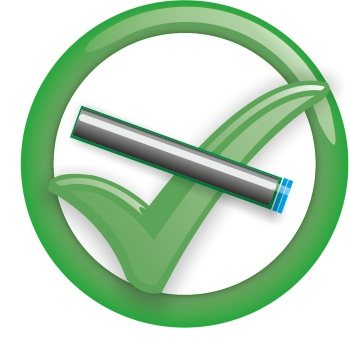 Perhaps you have seen a family member or friend with an electronic cigarette. Maybe you noticed someone using one in a public place that does not allow smoking. Perhaps you are considering using ecigs in place of the tobacco cigarettes that you are currently using. Whatever the reason, this neat little device has caught your attention and got you wondering whether they are a safe option. These battery powered devices provide a form of nicotine and bear a striking resemblance to a conventional cigarette. This seemingly safer alternative to tobacco is rapidly growing in popularity as the sales of traditional cigarettes are on the decline.

What Is In An Ecig?

When you take a draw on the e-cigarette, the batter heats the liquid and it is atomized into a vapor that you can inhale. The levels of nicotine vary in strength, making it possible for you to choose the amount that is right for you. Different from the carcinogenic tobacco cigarettes, an electronic cigarette is generally made up of three primary ingredients. These ingredients include the nicotine, the flavoring of your choice and propylene glycol. Syrupy propylene glycol is a synthetic liquid that is frequently added to cosmetics, foods and some medications in order to absorb water and maintain moisture. It is often found in soft drinks, cupcakes and salad dressings. It can also be found in antiperspirants, shampoos and soaps. What are its side effects?

The Benefits of Vaping

One the greatest benefits of electronic cigarettes is the fact that nothing is burning. These devices do not burn tobacco, nor do they produce any type of smoke. This means that there is no carbon monoxide being produced and there is no odor. All you are inhaling when you puff on an e-cigarette is vapor. Another advantage is that you have the power to choose how much nicotine you get with each ecig. You can choose a little, or you can choose a lot. It is even possible to choose an electronic cigarette that does not contain any nicotine in it at all. This has allowed many cigarette smokers to step down gradually from tobacco use.

It is difficult to say for certain whether electronic cigarettes are safe or not because they have not been on the market long enough to produce significant evidence one way or the other. After all, it did take a number of decades to determine all of the risks associated with tobacco cigarettes. Regardless, due the reduction of hazardous chemicals and secondhand smoke, electronic cigarettes do appear to be much safer than smoking traditional cigarettes. Dangers of Electronic Cigarettes